Over at the San Francisco Chronicle's The Poop, they have been posting hilarious pictures of bizarre halloween costumes. This "crappiest halloween costume" cracked me up because I once went as an outhouse. Yes, my older sister was the house, and I was the outhouse. I thought it was really cool at the time & I got to carry toilet paper around. Sheesh. Other hits from The Poop: snack food costumes for infants, a car air-freshener, and...you *have* to see this...the disturbing (but tasty?) Martha Stewart line (apparently, this is real).

Other memorable costumes (all homemade) that came through our house:
How about you? What is your most memorable Halloween costume? Post a comment below and let us know. I *love* these things. 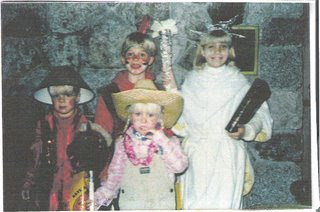 Don't forget to check out all the Robert's Snow features this week (schedule is to the right). Some of the snowflakes this week are *really* beautiful!

Three Muskateers. But my mom bought me, my brother, and our good friend Marc these straw hats that were supposed to resemble the swashbuckling type. We also bought three cans of spray paint. That afternoon, we coated the hats with paint. The paint was barely dry by nightfall. We were very young and didn't care about the ring of paint around our heads or the dizzying fumes.

Thanks for your comment Josephine!
I am trying to rack my brain for a terrible costume I had. Well, it was pretty tough being LadyLovlieLocks from the 80's cartoon show. Really tough without the talking animals in my hair (google it) Of course being 5 I wanted to go as her best friend, which no one recognized anyways.
Love the pic and i really enjoyed your music on your myspace page. Even did a little drawing to it. :)

KJ--I love the Three Muskateers story! What are a few fumes if you *look* cool?

and Julia...I *did* google LadyLovely Locks and now that I see her, I totally remember that show! AND...there is a complete LadyLovelyLocks.org website that includes a user forum for Costumes. So you were not the only one!