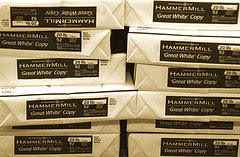 Well, it's that time of the month...my GOOD magazine arrived in the mail. The theme of the magazine this month was Big Ideas. Out of all the grandiose ideas GOOD outlined (a lunar ark, carbon offsets, Russian democracy), my imagination was captured by a seemingly small, simple idea that earned a couple paragraphs in the issue: changing our paper margins.

Tamara Krinsky has started an effort to change the U.S. default paper margins from the standard 1.25" to .75". Simple enough, right? Well, according to Penn State University, if the entire country made this small change, it would save 380,000 tons of paper per year, and over $400 million in paper costs. That is stunning.

You can read PSU's statistics & breakdown of the study here (.pdf).

Tamara has what I believe to be some pretty simple, accessible goals. According to her website, www.changethemargins.com, she would like to accomplish the following:
Here's an interesting 4 minute interview with Tamara Krinsky on NPR about her project.

So, what do you think? Good idea? Can you think of any reason *not* to change the margins?

Thanks so much for the shout out! The petition signatures doubled in the last two days, and was trying to figure out why. Your post led me to the discovery that GOOD had run the story. Keeping fingers crossed that everyone will be as supportive of the idea that you have been!

Hey Tamara. Thanks for putting this all together & coming up with such a great, simple idea. How great that petition signatures have doubled...I hope they continue to multiply!