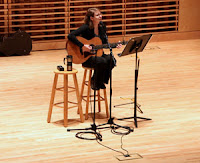 As many of you know, I recently finished up a Songs of the Civil War Era artist residency in the Brunswick, Maine school district. I visited each fifth grade classroom three times and we had loads of fun singing the songs sung on the battlefield, cotton fields, and the homefront. We saw how the changing views of African Americans began to appear in popular music well before the war, and we learned about the "new American music" that the whole world was talking about long after the fighting was over.

But the fun's not over yet!

This Saturday, I'll give a final concert along with Martin Swinger (who's been working with the 1st graders). It's open to the public, so if you're in the area, I hope you'll come!


Saturday, May 21
2pm
Crooker Theater
I'm inviting all willing fifth graders to come up on stage with me to sing for you. If you're lucky, they'll share some of the "battle songs" they wrote themselves!

And even if you don't come to the concert, you can still hear the classroom songs. Some are funny, some are touching, some are very proud! You can listen to the classroom songs in the Listening Room at Songwriting for Kids. And you can even check out The Brunswick Broadside (.pdf) to read all the lyrics.

I hope I'll see you on Saturday. Thanks, as always, to Arts Are Elementary for the grant that made all of this possible!
Posted by Josephine Cameron