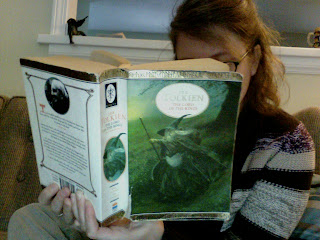 Young Adult author Jo Knowles has started a meme in honor of Banned Books Week. Here's how it goes:

1. Go find your favorite banned book.
2. Take a picture of yourself with said book.
3. Give that book some love by explaining why you think it is an important book.
4. Post it to your blog.
5. Spread the word!

Fair warning: I'm going to get around to this in a meandering, probably long, somewhat non-sequitur way.

When I was a kid, my parents had strict rules about what my siblings and I could read, watch, or listen to (witchcraft, magic, monsters, and violence were high on the censored list) and I was an extremely obedient child. While my siblings would sneak a little AC/DC, lie to my parents about a movie they were going to see, or "accidentally" lose notes meant for a teacher, I was a different breed.

I remember vividly the dozens of times I walked, red-faced and heart-pounding, to the front of the classroom to quietly tell the teacher I wasn't allowed to read the book that had been chosen. As a result, I read Robinson Crusoe instead of Lord of the Flies, sat out in the hall while the kids watched Dungeons and Dragons during a special library treat, and skipped music class on the days they sang songs about Halloween (though I got to know the lyrics pretty well since kids would sing them to me tauntingly over recess..."oooooo Witches' Brew...").

I didn't mind the ridicule from my classmates because I was being a good girl. I was following the rules, doing the right thing. But I was a voracious reader and I *did* mind missing out on the books.

home from the library. I must have been in third grade or so because in our school library, K-2 kids were only allowed to check out picture books and easy readers. Our librarian didn't want us to be tempted by anything that wasn't "age-appropriate" (oh, how I coveted the novels in the big kids' section!) I'd convinced myself that since the coin Jane finds in Mr. Eager's book is only half magic, it would be okay to read. Besides, the book was full of adventure and historical (and hysterical!) hijinks. I'd picked it up and I couldn't put it down. But when my mom came up to tuck me in that night and found me reading the book, she was livid. I closed the book and tearfully promised to return it the next day.

That night was the longest night of my 8-year-old life. I couldn't sleep because my brain was working out the following logic: a) I'd checked out a book about magic, b) books about magic were evil, c) I liked the book about magic, so d) I was evil. I felt horrible. Even worse, knowing that it was evil, I still wanted to find out what happened to Jane and her siblings in King Arthur's Court. Further proof that I was evil. In an extraordinary feat of will power, mostly to prove to myself that I could still be good if I tried, I cried myself to sleep and returned the book.

Two important things happened after that that changed my life.

The first was that I became good friends with Mrs. Letherman, an elderly friend of the family who had a summer cabin on our road. Every week, I would ride my bike to her house and help weed her garden. After gardening, we'd drink chamomile tea and talk about books. Her cabin walls were covered from floor to ceiling with books. And Mrs. Letherman gave me an unfathomable gift: she told me that as long as I was at her house, I was allowed to read anything on her shelves. Anything. "Even if it's too old for me?" I asked, my eyes probably popping out of my head looking at all those books. She thought that was a ridiculous question.

Being the consummate good girl, I still tried to choose books my mother would approve of, but still. The fact that an adult had opened that door, had trusted me with every piece of knowledge she had, meant something huge to me.

Years later, the second important thing happened: I read The Lord of the Rings. This was probably the first time I blatantly ignored my parents rules about reading. I was fifteen. I picked up the first book knowing it was against the rules. I read it anyway. At home. In front of my parents. And when my mother threatened to throw it away, I took to keeping the paperback on my person (in the back pocket of my baggy jeans), guarding it at all times.

I'd been told the trilogy was satanic (the same reason a church in New Mexico gave when they burned the trilogy as recently as 2001), but I didn't see anything satanic about it at all. Here was a story about loyalty and friendship, about choosing truth and goodness over evil, about love and poetry and courage. While I read, I felt my worldview shaking. This was not an evil book. It was perhaps the most un-evil book I'd ever read. So what did that mean about the rest? Bridge to Terabithia, and Lord of the Flies, and countless other books I'd missed out on over the years?

I resolved, over the pages of J.R.R. Tolkien's masterpiece, to always read what I wanted to read and make up my own mind about the content, whatever the consequences. To this day, I believe that The Lord of the Rings taught me to think critically, question my own beliefs, and always strive to be a better human being. I'm grateful every day for the freedom to read. For public libraries and for all of the librarians and teachers out there who fight to provide access to all kinds of books for all kinds of readers.

Post script: Thankfully, my mom did eventually make her peace with Tolkien. He was a Catholic, after all, and friends with C.S. Lewis who is the perfect born-again role model (though for most of my life, The Lion, the Witch, and the Wardrobe was also banned from our house...witches and magic and all). And some of my defiance wore off. My younger sisters were allowed to read Harry Potter without threats of ripping out the pages, so I like to think I was responsible for a little progress here and there.

Post-post script: I did get to finish Half Magic, eventually. On my 21st birthday, my dear friend Amy gave me a copy. It was every bit as good as I remembered it.

Information on Banned Books Week can be found at the ALA.

Now it's your turn...what is your favorite banned book? Here are a few great ones to choose from:

This is my favorite post yet. I laughed out loud and grabbed my heart in sympathy for a young Josie.