Lena Horne: I Got a Right to Sing the Blues 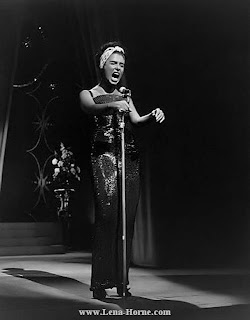 This month, we lost the lovely, elegant Lena Horne. I've always admired how much intensity Ms. Horne brought to her singing. When you listen to a Lena Horne song, you believe each word is true because she put everything she had into her performances. In her melancholy songs, you can feel the ache in her voice like it's a tangible thing.

There's a fascinating obituary over at the New York Times about Ms. Horne's experiences as a black woman in Hollywood in the 1940s:


"Ms. Horne was stuffed into one “all-star” film musical after another...to sing a song or two that, she later recalled, could easily be snipped from the movie when it played in the South, where the idea of an African-American performer in anything but a subservient role in a movie with an otherwise all-white cast was unthinkable."

is, of course, the quintessential Lena Horne anthem, I've always been partial to her version of I Got a Right To Sing The Blues. There's that ache in the way she sings "down around the river" that just gets me every time. I couldn't find a YouTube video for this one, so here's a clip. [I was also able to find the entire song here, but you may need Quicktime or something to hear it.]

Email ThisBlogThis!Share to TwitterShare to FacebookShare to Pinterest
Labels: i've got a right to sing the blues, lena horne, music