Sam Phillips is a Creative Genius 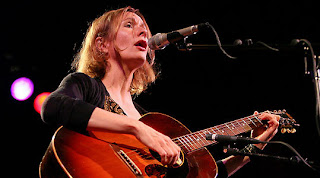 If the title of this post isn't enough to warn you, I'll let you know there's a pretty good chance you're in for some fangirl gushing today. On Saturday, Kevin and I drove 2 1/2 hours down to the Somerville Theater to see Sam Phillips in concert. And was it worth the drive, you ask? Oh, do you *really* need to ask?

She started off the show with my two favorite songs. I mean, what are the odds? The first song was I Need Love from her 1994 album Martinis and Bikinis. It's the one with that phenomenal chorus:

I need love, not some sentimental prison
I need God, not the political church
I need fire, to melt this frozen sea inside me
I need love

And the second song was Sister Rosetta Goes Before Us, off her new album (and recently covered by Alison Krauss and Robert Plant). It was even more striking live, with the sounds of the drums and that crazy violinophone clamoring together over your head.

Which brings me to her band. Ted Reichman played accordian, keyboard, and guitar. Eric Gorfain played violinophone, banjo, a supercool little white electric guitar, and various other stringed instruments. And Jay Bellerose had the coolest drum set I think I have ever seen, equipped with a gigantic vintage wooden kick drum and what looked like a huge sack of bells strapped to his leg.

These guys seemed a little like a trio of mad scientists, each sitting in his corner tinkering away--sometimes holding back so much it left you breathless, and other times letting go with abandon that shook you to the bone. They were intense, and when Sam Phillips' haunting vocals cut through, the effect was extraordinary.

And did Sam Phillips' deliciously quirky personality come shining through? Oh, yes it did. On Shake It Down, the stage manager nonchalantly brought out a gigantic metal shovel for her to bang away on, nonplussed (like people do this in concerts every day). For Animals on Wheels, the band left the stage, leaving her alone, holding a tiny, tinny dictophone to the microphone for her piano accompaniment. Every once in a while, she would shake it to distort the sound before jumping back into the verse.

I have to admit, I got a little teared up during Don't Do Anything. It just hit me during that song that I have been listening consistently to Sam Phillips' voice since I was about 10 or 11 years old. I thought of all the things I've gone through (good and bad) while listening to her music, and how I essentially grew up (and am still growing up) with her lyrics in my head. To sit there in the front row, listening to her sing...well, what can I say? It was pretty profound.

Here are the Sam Phillips tour dates, so you won't miss a concert near you.

Wow, sounds like a great time, so glad you got to see her live!