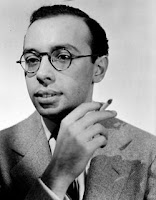 Earlier this month, PBS did an American Masters special on Ahmet Ertegun, one of the founders of Atlantic Records. I wasn't around to watch it at the time, but (thanks to the magic of Tivo) I watched it last night and it was fascinating.

Ahmet Ertegun was born in Istanbul and came to the US in the 1930s when his father became the Turkish ambassador to the US. Instead of following his father's footsteps into diplomacy, he got a loan from a family dentist and founded Atlantic Records (a foray into a whole other kind of diplomacy).

The most amazing thing about watching the special is to see the impeccable ear for talent that Ahmet Ertegun had. He first and foremost loved music, which is unfortunately not often the case with the CEOs that run today's music business. Among the many Atlantic Records musicians he signed and worked with, you may recognize some of these young upstarts:
On the American Masters website, you can read all about the making of Atlantic, and view all sorts of interesting video clips of Ahmet talking about his philosophy on what makes a hit song, his love of Miles Davis, missing out on signing The Beatles, and more. If you missed the special, and didn't Tivo it, the website is a good substitute.

Ahmet Ertegun died last year, while the American Masters special was in production. He died at the age of 83 from injuries suffered after falling backstage at a Rolling Stones concert in New York City. Now how's that for poetry?
Posted by Josephine Cameron

you know i love ahmet, jo! first ray and aretha, and then i was born again with phil collins!