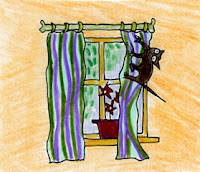 In the free song category, Edie Brickell (remember her from the late 80s/early 90s?) has put up a website with a bunch of new songs that you can download for free.

I have always, always been a fan of Ms. Brickell's voice and whimsy, so I had a lot of fun exploring this site. As she describes it in her note on the home page, this is a site for songs and "musical doodles" that will probably never make it on to an album.

The songs range from silly ditties like "The Pond" (where "romances, mimosas, and blue bonnets grow") , to carefree folk-ish songs like "Let it Slide" ("I'm gonna kick this rock on down the road/I'm not gonna carry no heavy load").

There's even a very cool poppy, produced, and catchy "Long Line" from her new project with Harper Simon (Paul Simon's son) & Rene Lopez which is due out this Spring.