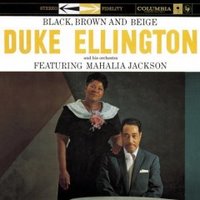 I have the good fortune this winter of singing as a guest vocalist for the Richard Nelson Quintet, a jazz quintet based here in Maine. We’re doing a holiday-ish concert in December that Richard is calling “A Concert in the Spirit of Peace and Serenity” (concert details are on my website). One of the first songs Richard asked me to sing for this show is one of my favorite melodies written by Duke Ellington: Come Sunday.

Besides the fact that “Come Sunday” has a gorgeous melody sung by one of my musical heroines, Mahalia Jackson, I’ve always been intrigued by the album it came from, Ellington’s Black, Brown and Beige. It’s interesting to me because we tend to see people in certain ways. When they move outside of that view we’ve created it can be, well, disconcerting to say the least.

Up until the 1940’s Duke Ellington was known pretty specifically for his big band and for popular songs like “Take the A Train” and “It Don’t Mean a Thing if it Ain’t Got that Swing.” Ellington was an extremely talented composer, and he began to experiment with even more complex music. In 1943, he performed an original symphony at Carnegie Hall: “Black, Brown, and Beige” which

The symphony wasn’t exactly jazz music, and it wasn’t exactly classical music. The critics couldn’t fit it into any set category of music, and their reviews and responses were so fiercely negative that Ellington never performed the entire piece in public again.

Luckily, he later recorded some of the music from this concert (though never the entire repertoire) on the album Black, Brown, and Beige, and it is there that we can here the lovely Mahalia Jackson singing Part IV: Come Sunday.