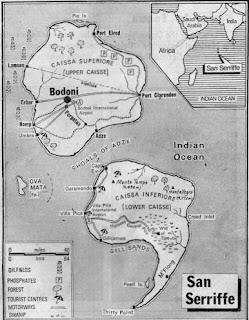 A little treat for the day-after-April-Fool's:

The Top 100 April Fool's Day Hoaxes of All Time (from the Museum of Hoaxes...did you even know there was such a place?)

I've only worked my way through the top 10 so far, but I love the bumper spaghetti crop from 1957, and the San Serriffe Islands (in the shape of a semi-colon) from 1977. And it made me grin from ear to ear to learn that hundreds of people honestly thought they had succumbed to The Jupiter Effect when a 1976 April Fool's report from the BBC report claimed it would cause people to feel a "floating sensation." Several people even claimed they floated across the room...well, it was the 70s after all!

If you didn't get enough April Fool's yesterday, the Top 100 should keep you well entertained until next year.