Playing Hooky with the Great Books Club or, The Importance of Being Taken Seriously

Last week, my mother sent me an article from my hometown paper. It described a scholarship fund for my high school, set up in the memory of Carol Yahr who died in a car accident in 2009. I read the article three times through, and I haven't been able to put it out of my mind. 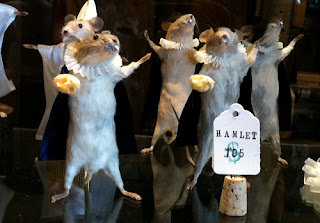 Back in the early 90's when I was in high school way up in the breathtaking boondocks of Northern Wisconsin, our English program was less than serious. In "College Bound English" (the highest level senior English course you could take, designed for those few seniors who might consider going to college), we read books like Robert Ludlum's The Bourne Identity, Louis Lamour's western novel Last of the Breed, and (because Shakespeare was state mandated) Hamlet. The latter was delivered in both a "modern English" version ("Hey, Hamlet!") and a cartoon version where mice dressed as Hamlet and Ophelia explained the plot of the play. I searched for an image, and the best I could find was this odd taxidermy vignette, which gets the point across just fine.

The expectation was that high school kids wouldn't and in fact couldn't understand anything more complicated than plot-driven suspense novels and watered-down sum-ups. Nor would we want to.

Most of my classmates loved our English teacher, but I was an odd kid. I read Chaucer and Beowulf over the summer. I refused to read the cartoon Hamlet and brought my own version of the original Shakespearean to class. On one visit to the local library, I saw a flyer for a weekly Great Books Discussion held in the mornings, and I petitioned the school to let me and a couple friends attend.

Each week, my friends and I left school to sit around a table in the basement of the Demmer Library with eight or nine retirees holding cheesy-looking volumes filled with selections from the greats. Chekov, Aristotle, Kant. Writers I'd never be expected to read in school. We discussed each selection for an hour, and probably nobody said anything spectacular. But here's the thing: every week, the adults in that room took us seriously. They had fifty and sixty years on us, yet they listened as if a sixteen year old kid actually had something valuable to bring to the conversation. In school, I wasn't expected to do anything but show up. These people not only expected me to think about literature, they expected my thoughts to matter.

Eventually, I lost permission to attend Great Books. I can't remember the reason. Probably I was missing an important gym unit on bowling. All I remember is that I didn't care whether I had permission or not. I kept going. The Great Books club had given me permission to take myself seriously. Some kids play hooky to go to the movies or skip class or smoke. I snuck out of school to talk about books.

So. The scholarship. I met Carol Yahr in that room. When I graduated, she sent me yearly Christmas cards wishing me good luck in my studies, congratulating me on my accomplishments, encouraging me to be the person I wanted to become. When I came home the summer before graduate school to work as the curator of the local historical museum, she and her husband Warren would come to visit and chat. Warren had written a book, Smokechaser, and it was the first time I'd read a book written by someone I know. It was exhilarating to see firsthand that real people write books. Even people who come from the middle-of-nowhere Wisconsin. People like me. When I got married, Warren gave us six leaves he'd carved out of wood, each labeled with the type of leaf and the type of wood it was made out of. They are among of my favorite possessions and I keep them on the windowsill of my writing room for inspiration.

I know Carol would be so proud of the scholarship that Warren established in her honor. She cared deeply about students, about literature, about learning. Believe me, when you are a rural kid from way Up North, it can be easy to feel like your options and opportunities are limited. Like your voice is too small to matter. Like you couldn't even be expected to try. But even the smallest encouragement, the smallest light in a dim, musty library basement can change all that.

I guess all I want to say is this:

To Carol, and Warren, and all the adults out there who take kids seriously, thank you.

postscript: I'm glad to say that eventually, the school approved the Great Books program and allowed a few students to participate each year. I believe the library is still sponsoring the program, and I hope there are students out there who are participating and enjoying it as much as I did.

Another example of your great talent as a writer and observer of life. Thanks for sharing this, Josie! I relate to so many points you made here. I grew up in a blue-collar town and only a select few were slated for the 'advanced' classes. I wasn't one of them and in fact, my high school counselor told me college would be beyond my abilities. Too bad I don't remember his name 'cuz it'd be fun to send him a copy of my undergrad and graduate degrees. :)

Melanie, did we have the same guidance counselor? Ours told a girl in our class she was too poor and not smart enough to go to college and she should think about starting a family. Grr. It makes me crazy. I'm glad you didn't let that advice limit you!

Wow! How do people like that get jobs as guidance counselors? Craziness!