Last week, I posted about Envaya, a project designed to connect grassroots organizations with software and online technology that can empower change in local communities. [Read Envaya: Part One]

Joshua Stern is the intrepid young co-founder of Envaya, and he grew up right here in Maine. After graduating from Stanford with a degree in computer science, Joshua served as a Peace Corps volunteer in Tanzania, where he worked to build computer infrastructure and provide fundamental ICT education to the communities in his region. He was kind enough to answer a few questions about his experiences in Tanzania and how he got involved in this new project.

Next week, I'll interview Envaya's Tanzania Program Manager, Radhina Kipozi. She'll tell us what it was like to be one of Tanzania's most popular teenage singers, and how that experience shaped her work with Envaya.

After college, you went into the Peace Corps and worked in Tanzania. What was that like?

Peace Corps was a formative experience for me, and in many ways led to the creation of Envaya. Peace Corps service placed me in a remote village on Pemba Island, Tanzania. I was far from other volunteers and it was numbingly hot, especially for a Mainer. Nutritious food on the island was unreliable (most fruits and vegetables had to be imported by irregular boat, as the soil on the island has been ravaged by centuries of spice farming). I repeatedly suffered malaria. Electricity was frequently unavailable and infrastructure was decayed, which forced me to wire some buildings and labs myself. Despite these challenges, I built lasting relationships, and set up computer labs and connected hundreds of people to the Internet for the first time.

My arrival on Pemba coincided with a number of donations of computer labs from larger aid agencies. These donations would consist of computers, an internet dish, and a generator. These were given to a teachers training college, some secondary schools, some community centers, and teachers centers. A handful of the labs had been partially set up by the time I'd arrived, but most often equipment remained in boxes. I physically set up the computers and internet. In some cases I had to assist in wiring the labs for electricity from the generators. I am proud to have not electrocuted myself, (although I did get zapped once). 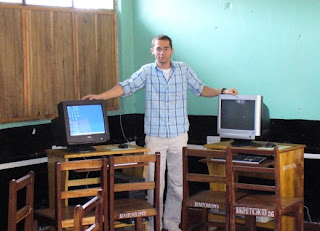 Once labs were set up I worked to train local counterparts to maintain and teach from the labs. I also taught basic computer skills to students, teachers, and community leaders. After getting through the basics of computers and the internet, many community organization leaders wanted to set up their own websites. Existing tools were far too challenging, and unsuited to the low-bandwidth connections.

Who was the most interesting person that you met [during Peace Corps]?

During my Peace Corps service, I met Radhina Kipozi, a popular Tanzanian singer and social entrepreneur. Radhina was deeply involved in social causes such as the dance4life program to fight HIV/AIDS and her social work connected her with many community-based organizations around Tanzania. She is an independent journalist, and one of the leaders of JEAN Media, a Tanzanian civil society organization that improves communication among a network of grassroots organizations working to address environmental issues and HIV/AIDS. She became one of Envaya's co-founders, and is our Program Manager in Tanzania. She has been invaluable to our success in getting Envaya off the ground in Tanzania.

Did your experiences there [in the Peace Corps] help you with your current Envaya project? What did you learn? 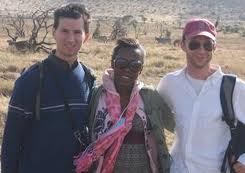 One of my biggest takeaways overall from my time in the Peace Corps was that most effective and sustainable development efforts and solutions begin at the community level. Grassroots civil society organizations (CSOs) play a vital role in society by advocating for positive change, developing new approaches to poverty reduction, and running projects that range from leading HIV/AIDS education programs to planting trees. Unfortunately, many CSOs lack access to information and communication technologies (ICTs) that would enable their efforts to have a greater impact. Most CSOs have no online presence and therefore have an extremely limited ability to raise funds, communicate with grantmakers, and share resources and ideas with other CSOs and communities.

And now, on envaya.org, organizations with little computer experience can easily create websites to publish their latest news and share their successes and challenges. By providing usable technology that is tailored to the needs of Tanzanian CSOs, Envaya is increasing the capacity of the civil society sector to create systemic, positive change. The Envaya platform is the foundation of a digital infrastructure that can reach communities and organizations that lack an online voice. Users can connect to an online community in which they can learn from each other, plan transformative projects, and be inspired and encouraged to act.
Posted by Josephine Cameron