When I was in high school, I had a brother-in-law who was fond of telling me that one person can't change the world. I like to think that what he was really driving at was that it takes many individual actions, bound together, to create true change. No, one drop isn't going to fill the bucket. But millions of individual drops, joined together? Now we're getting somewhere!

I've been reading a lot about an interesting organization called Envaya that is trying to make a real difference in the third world by simply connecting people who want to create change. There are so many individual organizations doing good work on a local level. Yet if they could connect with others in their regions and in the world, if they could access grant money, share resources and best practice advice, and work together toward common goals, just think about how much the world could change. 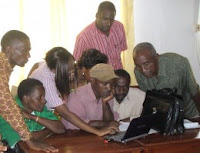 Envaya, at it's core is a simple idea. It's an organization that develops online and mobile tools that allow civil service organizations (CSOs) in the third world to connect to the internet and set up simple websites. Through Envaya's digital network, CSOs can communicate, raise funds, and share resources to work on big problems like special needs education, deforestation, or clean water. According to a recent Forbes.com article, "Even people who live hundreds of miles from a cable, a phone line, or a paved road, and who subsist on a few dollars a week, can use Envaya’s ultra-light platform to establish websites."

So here's the cool part. Envaya was co-founded by 27-year-old Joshua Stern. Josh grew up here in Maine and both he and Radhina Kipozi (Envaya's Tanzania Program Manager) have agreed to do a couple blog interviews here on Please Come Flying. Their story is fascinating. Joshua worked in the Peace Corps after college and Radhina was one of Tanzania's most popular singers as a teenager. They'll tell us a bit about how they met, and what inspired them to begin the work they are doing with Envaya.

Throughout April, I'll post pieces of Joshua and Radhina's interviews. Next week, Josh will tell us a bit about his work in the Peace Corps and what he experienced there that gave him his big idea to change the world...
Posted by Josephine Cameron