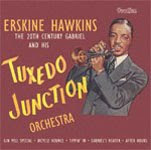 This weekend, we're painting the town red for Kevin's birthday, so I thought a post about one of my favorite swing tunes was in order. (Plus, since reading Claudette Colvin: Twice Toward Justice, I've had Birmingham on the brain.)

Tuxedo Junction was written in 1939 by Erskine Hawkins. It was named after a two-block area in Ensley, Alabama, a predominantly black suburb of Birmingham. In a Spring 2005 article for Alabama Heritage, Donald Rohar describes the area:

"The Junction was the only venue for dining, dancing, shopping, and live music that Birmingham's black population could call its own. But what a place it was.

The renowned intersection was the turn-around point for the Birmingham Trolley Company's Wylam and Pratt City streetcars. Locals simply called it the Junction. Many of the residents, partygoers, and fun seekers who were employed at the steel mill, iron works, or lumber mill, would catch the trolley after a shower and fresh change of clothes at work and head straight to the Junction for an evening of food, fun, and entertainment.

Work clothes or casual apparel were permissible for a bar and lounge, but totally unacceptable attire for the ballroom. And the ballroom was, after all, the evening's ultimate destination. A zoot suit and two-tone shoes or a tux was the appropriate evening attire for men."

Maybe Kevin is going to have to scrounge up a zoot suit for his birthday celebration!

Here's the original Erskine Hawkins version of the song:

This is a brilliantly researched and extremely well written historical document written by one of Birmingham's finest educators. Mr. Rohar has brought distinstion and pride to the City of Birmingham, the Birmingham Public School System and the Great State of Alabama.

Thanks, Anonymous. I was certainly glad to come across it.