First off, I have to apologize for being so sporadic with my blog this month. Usually, I look forward to writing Black History Month posts because I love to honor the black writers and musicians who have been such important voices in our country's history. Suffice it to say, life has gotten more hectic than usual this month and I'll be back on my game in a week or so. :)

Until The Snowy Day (published in 1963), American children's books featured white children as the heroes (if you know of one that didn't, I'd love to hear about it). In the biography on his website, Ezra Jack Keats says:

Then began an experience that turned my life around—working on a book with a black kid as hero. None of the manuscripts I’d been illustrating featured any black kids—except for token blacks in the background. My book would have him there simply because he should have been there all along.

Besides being culturally groundbreaking, opening up children's literature to some of the marginalized citizens in our society, The Snowy Day is a beautiful book that perfectly captures the wonder and joy that can be found outside on a snowy day (yes, even in the city!)

A couple years ago, Kevin took me to the Eric Carle Museum of Picture Book Art for my birthday, and we got to see original pages from this book. It was amazing to see the original cutouts, watercolor, and collage in person. Illustrations that looked like a consistent whole in the published book turned out to be separate pieces of paper fit and intricately glued together. It just goes to show, things that seem so polished and perfect always have an underside with details we can't even begin to imagine.

With that in mind, I'll close with a story on Keats' website that I loved. Keats was in school during the Depression, and his father tried to discourage him from focusing on art. He wanted him to do something more practical that would earn money. In 1935, when Keats' father died of a heart attack, he had to go through his father's belongings:

"I found myself staring deep into his [my father’s] secret feelings. There in his wallet were worn and tattered newspaper clippings of the notices of the awards I had won. My silent admirer and supplier, he had been torn between his dread of my leading a life of hardship and his real pride in my work." 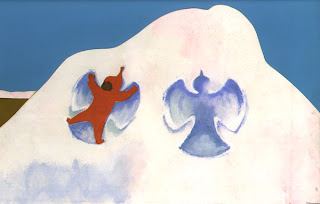 I'm amazed you were able to post--and a fantastic one, at that--amid all the chaos! Consider the next two days the last lap of a track meet mile: tough as nails, but I believe the Lead Foot Award is proof that you'll finish on your feet :)

This is one of my all time favorite books! I love Ezra jack Keats' work. I loved the story about his father too.
Thanks for sharing.

Oh, that Lead Foot Award has served me well. I should dig that thing out & put it on my wall for all the times I feel like I'm jogging through quicksand!