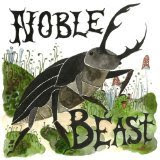 This weekend, Kevin and I were ridiculously excited to find out that Andrew Bird was coming to the college we work at. Somehow, we managed to find a couple students who weren't going to use their tickets (I was sure *no one* would want to give them up), and we tried not to look too old as we walked into the packed auditorium (we also had to hide a couple yawns around 10pm when the rest of the audience was apparently just getting *started* with their evening).

The show was phenomenal, and you should definitely check out the tour dates. I've been a fan of Andrew Bird since he was Andrew Bird's Bowl of Fire in the late 90's, but I've never seen him live. So it was fun to see little details in person. (Like, oh! that eerie background part is actually Andrew Bird whistling!) The set was perfectly whimsical, with Alice-in-Wonderland-sized, brightly colored phonograph-style speakers hovering over the musicians. The performance was terrific. Apparently, he had been trying to kick a fever for the last few days, and still he threw himself into the songs like he had all the energy in the world.

But the most striking thing about seeing Andrew Bird live was the extensive looping. He would play a few bars, loop it (which basically means you've created a recording of it that comes back over and over again through the speakers), loop something else over that, and so on until you felt like you were just being washed over with sound. If you don't know what I'm talking about, you can see it in this video. The first thing that he plays comes back again and again, and he's playing and looping more things over it as it goes along. The result was breathtaking.

Here's Natural Disaster, another song I like off Andrew Bird's new album, Noble Beast, that he played at the show: