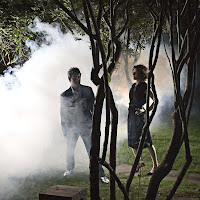 I don't know how I missed it for three whole weeks, but this morning I woke up and realized that the new collaboration between Edie Brickell and Harper Simon is out! The Heavy Circles was released Feb. 12, and so far this morning, I've listened to two songs:

So far, the vibe is cool, Edie Brickell's voice is engaging and startling and lovely as always, so now I'm off to Rhapsody to listen to the rest. I'll do a full review next week after I've had time to listen to the whole thing and process it all, but in the meantime, let me know what you think!
Posted by Josephine Cameron