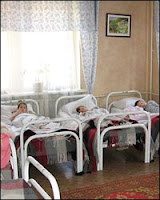 Two of my beautiful nieces were adopted from Russia 3 Christmases ago. The youngest (nearly 2 yrs old at the time) couldn't walk or even really stand on her own. She was in an orphanage that is considered to have relatively good, clean conditions, where the children were generally well cared for. Even still, the attendants were so overworked that all babies were left in their cribs pretty much until they were out of diapers. Between this and general undernourishment, my niece never developed the muscles she needed to move around like other toddlers.

On Wednesday, NPR broadcast this story about how the Russian government has temporarily suspended all foreign adoptions. According to this story, "half of the 15,000 Russian children adopted each year are taken in by foreigners."

Another story on MSNBC gives a few more details about the suspension, which is apparently a "licensing delay" and only short-term (though with no indication of an end-date).

I can understand that the system needs to be overhauled. Reform, done correctly, could be good for children in the long run. And I can maybe even understand Education Ministry official Sergei Vitelis' statement that "any normal state should create conditions for children to grow up in their own country." Ideally, each country could take care of all of its children. Last I checked, we do not live in an ideal world.

I just hope they will end this suspension in a timely manner. Temporary or not, the fact is that due to a "bureaucratic licensing overhaul", thousands of children will remain in overstuffed, understaffed orphanages, often neglected and abused, until the government sorts out the details.

7500 children per year may be a drop in the bucket when compared to all the children living in sickness and poverty all over the world. But when I see my little niece racing around the living room playing "Dog Pound" and dancing, jumping up and down, and laughing with her sister, I have to believe that placing those 7500 in loving homes, foreign or otherwise, actually does make a difference.

You can read a Red Cross report from 2000 on Russian orphanage conditions here.
Posted by Josephine Cameron