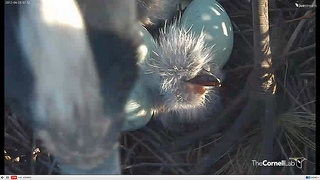 Okay, I admit I've been glued to Cornell's Great Blue Heron Webcam for a full month. Has it been worth it? Absolutely. Five nestlings hatched last week, and the folks at Cornell say the tiny chicks will grow to be four feet tall within the next six weeks!

Ridiculously, after all the hours I spent watching Mom and Dad sit on the nest, I missed every single hatching (though I did get to watch Mom lay an egg, which was crazy). Chick #3 hatched when I stepped away for 30 minutes to go to the grocery store. I came home to a voicemail from my sister saying, "It's hatching! It's hatching! Where are you?"

Thankfully, the moment was captured on video (a sweet and hilarious video at that). I know we're not supposed to anthropomorphize, but their bedhead reminds me of the New Wave/Punk rockers in the early 80s.