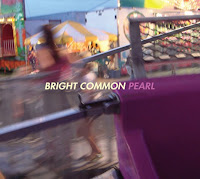 I've been listening this week to a new album by Bright Common, a local group here in Brunswick. Pearl

is their first album and by turns, it's haunting and lovely, expansive and intimate.

Around here, lead singer John Bisbee, is more well known for his sculpture than his crooning. He works almost entirely in metal, and more specifically, nails (hence the band named after a nail). His sculptures are intricate and breathtaking. When you stand in front of a John Bisbee work you can't help but be moved in some inexplicable way. Perhaps because all that common metal suddenly looks so delicate and beautiful. In 2004, The New Yorker described his work perfectly, "In Bisbee's hands, the spikes are transformed into objects of surprising grace." [See some of Bisbee's art]

Bandmate Mark Wethli is also a visual artist. Mainly a geometric painter who deals in deep swaths of shape and color, his full-scale Piper Club airplane sculpture was recently on display at Fort Andross this year and was a very cool departure. Like Bisbee's work, this piece took something as large and industrial as an airplane and allowed us to look at it from the inside out until it became something delicate, fragile, and full of wonder. [See some of Wethli's art]

But this post is about music, not art, and this is all to say that this is not your typical first album, nor your typical new band. These artists are attempting to bring the same sensibilities they bring to their visual art into an aural realm. And it's really quite a lovely experience.