Harold Arlen: Somewhere Over the Rainbow 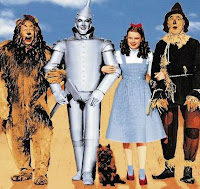 Back in March, I was asked to sing with the Bowdoin College Concert Band for an evening of standards and Gershwin Tunes. I just got some of the mp3 files from the concert and thought it might be fun to post one. (You can listen by clicking on the player at the bottom of this post.)

Harold Arlen is one of my songwriting heroes, with over 500 songs under his belt (including one of my all-time favorites, Stormy Weather). When he teamed up with lyricist Johnny Mercer in the 1940's, the results were pure magic: One for My Baby, Come Rain or Come Shine, That Old Black Magic, Ac-cen-tu-ate the Positive. In that old music-on-a-desert-island game, Harold Arlen would be my man.

But of course, his most famous song of all is "Somewhere Over the Rainbow," written for The Wizard of Oz and sung unforgettably by Judy Garland. Get this, though (from IMDB):


"Over the Rainbow" was nearly cut from the film; MGM felt that it made the Kansas sequence too long, as well as being too far over the heads of the children for whom it was intended. The studio also thought that it was degrading for Judy Garland to sing in a barnyard.

Anyway, here's me singing Somewhere Over the Rainbow with the Bowdoin College Concert Band. Hope you enjoy...

Good Morning, Josie. It's Sally in Coeur d'Alene, ID. Your mother sent me the link to your site. I've never blogged before, but yours is so delightful, as you are.

Enjoyed the family celebration at Alan's wedding. Have fun pictures to share.

Thanks for stopping by, Sally! You *should* have a blog that features all your cool products. Do you have an etsy shop?