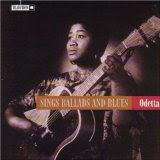 Last week, my friend John sent me an email to let me know that we lost one of the greatest Civil Rights activists and folk singers of all time.

Odetta's first album, Odetta Sings Ballads and Blues, came out in 1956, and for the last 52 years she has used folk music to inspire, motivate, and move people all over the globe for the cause of justice.

I love this quote from the interview below. Odetta is asked what role folk music played in the Civil Rights Movement, and for me, her answer perfectly sums up the power of her music:

"It was music from those who went before. The music gave them strength, and the music gave us strength to carry it on."

Here is a link to the New York Times obituary.

Here is a link to a 2005 interview with Odetta on NPR.

This is a brief clip of Odetta at the Newport Folk Festival in the 1960s.

And this is Odetta singing Keep On Moving It On in her 70s, looking frail, but her voice is just as strong as ever!

Here is Odetta talking about her life as an activist: