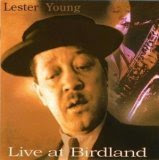 Lester Young classics like Lester Leaps In and Three Little Words are mixed with great renditions of popular standards like These Foolish Things and my grandparents' favorite, Polkadots and Moonbeams (apparently, my grandmother was quite the "pug-nosed dream" back in the day!)

I always try to sing like a horn--a trumpet or tenor sax, and I think Lester is just the opposite. He likes to play like a voice...Lester sings with his horn. You listen to him and you can almost hear the words.

That's definitely apparent on these live recordings. Young's smooth, sweet, lyrical sound is unmistakable. The disc is peppered with announcements encouraging listeners to invest in U.S. Savings Bonds (the radio series was sponsored by the U.S. Treasury, of all things), and the gooney announcer cuts in with his own 1950's flourishes like "Ca-rraaaa-zy!" which give the recordings a nice blast-from-the-past feel. I like imagining what it would have been like tuning in each week to Birdland on the radio. I suppose years from now people will say the same about old American Idol (or hopefully even Austin City Limits) episodes.

Here's another little taste of Lester Young. He's missing his porkpie hat in this one, but you can't miss the charming, cockeyed way he holds his sax: