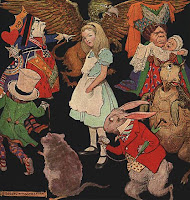 Artwork: "A Caucus Race" from Alice in Wonderland

I have to admit it: I've come down with Primary Fever. I knew it was serious when I actually couldn't sleep because I was thinking about it so much. Me! Believe me, if there's anything I can do well, it's sleep. Not to mention the fact that I don't usually bother about politics too much. Especially not the primaries.

And yet, here I am, a staunch Independent, considering switching my party affiliation just so I can go have my say in the Maine caucus on Feb. 10. And yes, it is a caucus, which sounds to me like the most painful form of voting out there:

At the municipal caucus, voters may speak for their preferred candidate and urge others to join with them. Caucus goers then indicate their candidate preference, often by standing in different parts of the caucus room. The number of voters for each candidate is tallied, and a preliminary number of delegates is assigned proportionately. After this first round of voting, caucus goers have an opportunity to change their votes. For instance, supporters of candidates who may not have enough votes to get a delegate may decide to switch to another candidate. A second round of tallying determines the number of delegates for each candidate from that municipality.

Speak? Urge others? Then do it again? Eep. I would like to walk in, stand in line, mark my ballot and turn it in, thank you very much. Have any of you been to a caucus? How bad is it, really?

So, non-political as I usually am, I've been trying to figure out why I've been so caught up in this primary season. Here's what I've come up with: it feels like it counts. For a couple reasons.

1. Neither party has a very clear front runner. So where I usually have the feeling that it is all sewn up anyway, and what is one more vote going to do, swing votes like me might really mean something this year. (Speaking of, have you registered to vote?)

2. With big things like Iraq and a faltering economy in our sights, it's not really just business as usual. And the candidates are pretty different from each other for once. It seems like who we choose to take over these issues might really mean something this year.

3. There are actually candidates that I like. This was a real shocker to me. Normally during a presidential election, I have this sinking feeling when I vote. Like I'm just choosing between two really bad possibilities. But there are a couple candidates in this election and one in particular :) that I really respect and think would be thoughtful and wise and good at the job of leading the country in a positive direction. So when I go and stand in that caucus corner, instead of feeling like I'm just going through the motions, it might actually mean something this year.

You can check the primary schedule here. Happy voting!
Posted by Josephine Cameron