Save the Music: For the Kids Three 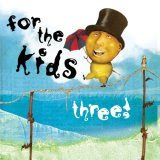 Fids & Kamily: First off, the 2007 Fids & Kamily Winners were announced this week! Last year, the rock stars of the kids' music blogosphere (Stefan from Zooglobble, Bill from Spare the Rock Spoil the Child, and Amy from The Lovely Mrs. Davis Tells You What to Think) joined forces to set up a panel of judges and choose the best kids' music of the year.
For the Kids: For the Kids Three ranked #12 on the 2007 Fids & Kamily Awards list. I recently received a review copy of this CD in the mail from Nettwerk Music Group. Now, I was interested because Nettwerk is the uber-hip record label/music management firm out of Canada that has consistently gone against "traditional" methods of operation in favor of a more grassroots approach. They were one of the first to embrace DRM-free (digital rights management) music, believing that if you buy a song, you should be able to play it on whatever device you want. They joined in the fight when the recording industry sued a Texas teenager for filesharing...Nettwerk offered to pay all the teen's legal fees during the fight. CEO Terry McBride's famous quote was, "Suing music fans is not the solution, it's the problem." They were way ahead of the game even before waves of musicians began to drop their major labels like hot potatoes. I remember reading this article in Wired when Barenaked Ladies decided to ditch their label and go with Nettwerk for their management.

So with that history in mind, it's not too surprising that Nettwerk has been targeting bloggers as part of their marketing campaign for For the Kids Three. If Zooglobble gives it a "definitely recommended" and The Lovely Mrs. Davis has it in her Minivan Rotation, that's a pretty big buzz already (at least in the land of cyber-savvy moms and dads who pride themselves on music cred). And here I am writing about it, too...and that's, well, something.

The album, by the way, is quite cool. Definitely worthy of a #12 on the Fids & Kamily Awards. There are a couple misses on the album, but in general Nettwerk has gathered a bunch of hip, unexpected artists (like Moby and Hem and Over the Rhine) who generally perform adult indie-pop music and created an album for kids (apparently, the third in a very hip series). The music is a mix of traditional kids' songs (done very non-traditionally) and originals that will probably make you smile and dance around a bit. Highlights for me?
Bottom line: Even if you don't like kids' music, this album is worth looking at just to get a whole list of cool new artists to listen to!

Bonus: A portion of the proceeds of the album go to VH1 Save the Music Foundation, which is dedicated to restoring and sustaining music programs in public schools.
Posted by Josephine Cameron

Email ThisBlogThis!Share to TwitterShare to FacebookShare to Pinterest
Labels: fids and kamily awards, for the kids three, music, nettwerk, spare the rock spoil the child, the lovely mrs. davis, zooglobble

I had no idea there was a new one out. Thanks! The first two are pretty good.